A downloadable game for Windows

A game about not colding.

These are all shippability issues, which will be fixed in future projects of mine.

Okay not sure but I think my game doesn't work. The health bar never regenerates. anyone else with this issue?

The only thing I'd ask for in this game is to make it so that you don't have to touch your mouse to restart and maybe not have to press escape either. They just feel sucky to press when the main controls are WASD + Space and dying would feel a lot smoother if it was just set to Space. Otherwise, great game! I had a lot of fun playing it!

Honestly a great game, took me a while to realize it was space to pick up a block but other than that game could use some more explaining as to what to do. Great job man

Duuude controls could be better!

Very good idea, I think it would be better if we acted block by block.

We've both finally released a game this past month after years of getting nowhere.

Crashes on start with and without DXVK, here is a backtrace: https://pastebin.com/DX42zJDD 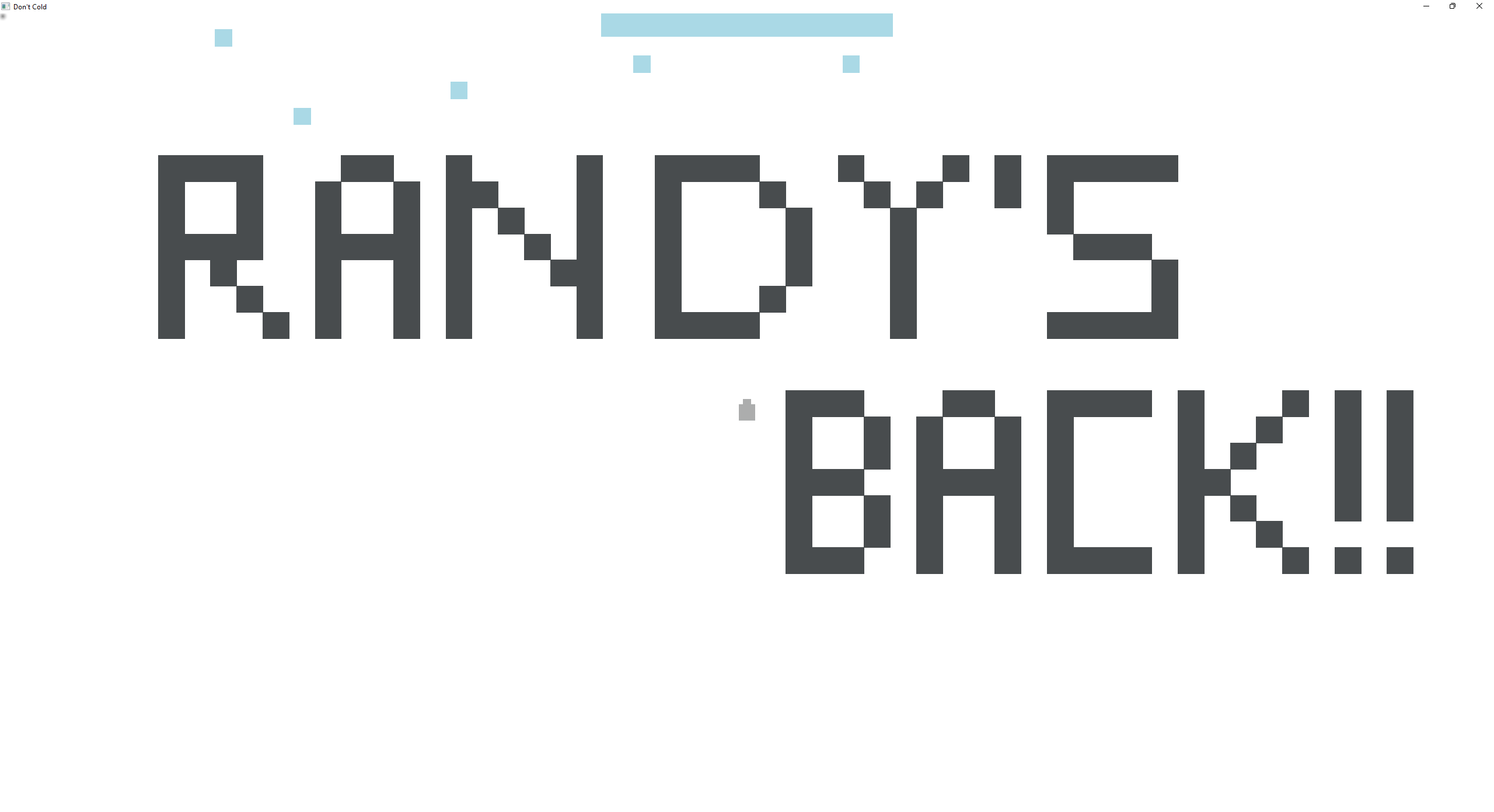 made it to the cave

I would literally pay you real money for this game... If it worked.

But It works on SteamDeck with enough dedication... That is, if I had one :(

Runs fine for me on Windows 10! It's a neat game, found the controls a bit odd though. Overall, great work on your first release!!!

I got mine to work after running into the same problems as a lot of others. Might be a fluke I dunno.

Extracted files. Tried to run .exe. Didn't. Oh well. I took the exe out of the folder and put it on the desktop. Didn't run there either. Put the exe back in at the bottom of the folder under telescope.dll. It now works.

I don't know why it works now. Hopefully this helps someone else.

Not sure why it doesn't work on windows, I've heard some people have had success installing development library's (like Unity).
I had to switch to Linux and it worked out of the box on Lutris.
Kinda ironic that he dissed linux devs in the videos but designed a game that only runs on Linux lol. 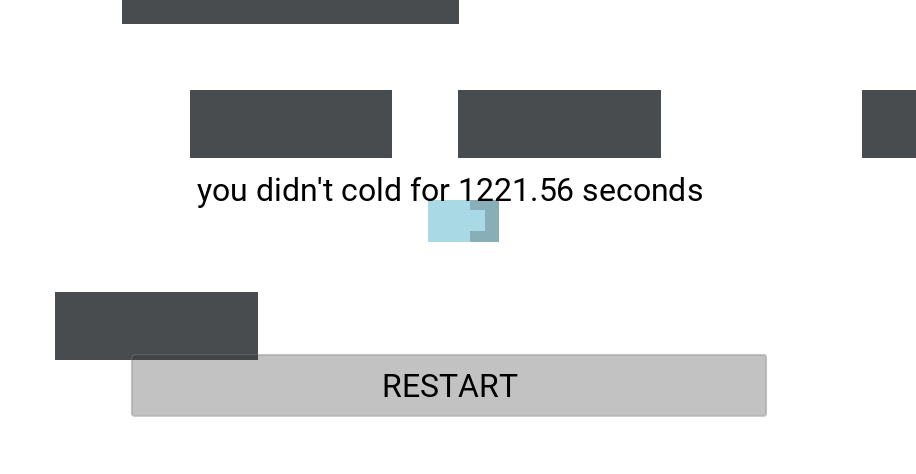 Neat lil game you got there. Congratulations for publishing your first game.

I am unable to run. Tried unzipping from the browser download, no good. Re-downloaded itch.io, installed from there. No good.

Maybe your rant about Windows 11 is warranted :shrug:

I don't have an error code or anything to work with, given I am novice.

Though I couldn't play I wanted to congratulate you on your Game A release!

will you ever make a mac release

This was amazing! I didn't cold for 457.36 seconds, but unfortunately I had to stop playing. I felt that my issues were mostly caused by the placement controls — I'd accidentally place the walls to the side or on top of myself... I didn't mind the WASD-Space combination though, and mostly played with one hand. Perhaps having the walls place on top of the player instead of in the direction they're facing would be easier? In any case, although repetitive, the gameplay was fun!

Worked on Linux with Lutris and Wine lutris-fshack-7.2 :)

Randy, could not open the game in windows 10.

Sadly I could not get this to run on Windows 10.

Event log says there is an error in render_d3d11.dll:

Successfully played on Linux through Bottles with lutris-fshack-7.2 runner.

Deleted after 5 attempts. It's too fast for me to enjoy. Congrats with your first published game though!

Seeing how your goal was to give anxiety, I'm here to say you succeeded, and my high score is 200second.

Some things of note, it took me two attempts to figure out how to pick up items, and the default volume was way too high.

This game idea could greatly benefit from multiplayer.

If you ever upload a new version, I'd recommend adding arrow-key controls. I tried remapping it myself and it was easier to place blocks precisely.

Good work on the game  Rando

Some gripes I had while playing was batteries that are corner placed were not easy to refill while indoors. perhaps a nearest neighbour could take the battery juice as well.

This one is more personal as well, but I  have a hard time pressing spacebar easily to place/pick up blocks while also using wasd to navigate. I'm more familiar with the arrow keys in a scenario like this or using another key for interaction if wasd is used.

Additionally escape is a strange choice for starting the game. The interact button might have served better here.

Some insight for future work that should have reusable code for different projects.

Something to avoid in the current project is needing to use a mouse on a game that can be navigated primarily with a keyboard.  like when restarting after failure.

Also seeing as the game comes without any form of instruction on controls or usage, it might be nice to update the itch description to give players more insight on core gameplay requirements. This doesn't mean spoon-feeding the user, but more just giving them the info they need to be able to play the game. In this example it would be controls and informing the user about the fullscreen bug under a known bugs section, as the interaction might be pretty common. (only just saw it on the download screen, it's lacking visibility here)

Heyo! Fantastic gameplay loop,  would be great if there was some UI that tells you what is what before the game starts (like what the controls are, what is a battery etc), otherwise very good :)

runs great through wine! fun game, I adore your videos! keep up the great work

Congrats on actually finishing a thing!

I'm running Windows 10 and the "dont_cold.exe" wouldn't start (regardless of compatibility options / administrator mode), no error message or anything.

I have the same issue

This exact same thing happened to me. I tried to run the application multiple ways and nothing happened. No logs were generated, no application was created in task manager. Nothing.
Looking forward to bugfix 1.0.1 :D

Fukken love it!
Played it on Win11, on an UItrawide, worked like a charm!
Keep the good work up!

Downloaded the Zip on a bog standard laptop running Windows 10, but can't get the game to work. Nothing happens when unpacking the zip-file, going into the folder and clicking the dont_cold.exe-file - Hopefully v1.0.1 will fix this, looking forward to trying the game :)

this game is great, can't wait to see whats next for bigrando420!

Got anxiety now but pretty fun

Hey Randy, super stoked to see you finally release something.

So obviously its rough, but I like the sound design and how quick it loads. Not a fan of the escape key restart, and would have liked an arrow keys option for movement.

The design language is not very intuitive, so it feels like you're stumbling in the dark to figure out what to do. Maybe have incremental levels to help build up your understanding.

Once I got the hang of it, there's definitely some fun to be had. Overall, solid first attempt.

Had trouble getting into it, but ok. Every move in the very beginning has to be correct or you die. I tried building new bases, but I died too often, got annoyed, deleted the game.

Still, kinda fun, but you have to be a better player than I am.

Audio is solid, graphics are imho too minimalistic because they don't communicate everything the player needs to know to understand what's going on (example: batteries draining when put them next to each other, there's no logic to it and my conclusion was: ok, one power station per room, not many).

The game is very punishing which is fitting and works because every run is very short and you don't have to wait for the level to reload. Personally, I really don't like escape as a restart button even if you think it's funny, because in games that make me restart a lot of times like super meat boy or hotline miami, I want to leave my hands where they are while playing and hit a non-gameplay-key (so I don't accidently restart while not ready). Just use 'r' like the rest of them!

That's it, congrats on your first published game!

I just played the shit out of this, the first couple of attempts were pretty bad on my part. Getting used to the game and all. Then I had a run that was over 10 min and I was thoroughly invested. It's fun it's stressful and it has me coming back for more. The sounds really help emphasize the need to not cold.

I got a segfault and not much information, maybe it's because I play on a striped down version of win10 and wine didn't run it either :(. 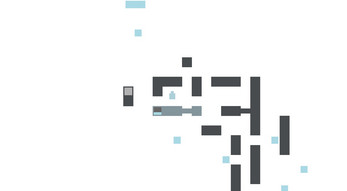